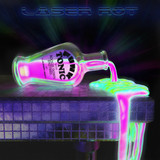 Josh McCann, also known as Laser Rot, is an American composer and producer who grew up around Columbus, Ohio, and currently lives in San Diego, California. Laser Rot’s feelgood funky sound carries elements of funk, disco, electro house, hip hop, and even orchestral works. His music has been compared to acts like Daft Punk, Chromeo, GRiZ, Basement Jaxx, and Modjo to name a few, but his tunes are always happy and uplifting. Laser Rot’s music has been in the Beatport Top 100 charts many times over. With more than 15 releases, and 50+ songs, including a funky house remake collaboration with Anthony Carey of Marvin Gaye’s “Sexual Healing”, Laser Rot has been continuously pumping out cheerful, upbeat music the people can boogie down to.