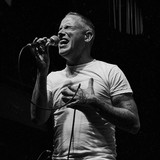 After 20 years of fronting the posthardcore legends Boysetsfire, vocalist Nathan Gray walked through fear and dove headfirst into being a solo artist.   After a successful first full-length release of his Feral Hymns, an acoustically-driven collection of achingly dark and honest songs recorded by Pete Steinkopf of BOUNCING SOULS, Gray immediately began writing his sophomore release. This time, he effortlessly married his signature voice with an Americana and Melodic Punk influenced wall of sound, having decided to push forward into writing all parts of his next release for a full backing band setup. With lyrics that were inspired by his journey to himself between those albums, Gray crafted an collection of songs meant to encourage and empower the outcasted and the broken, corners Gray knew all too well.   Working Title was released on January 31st, 2020 and carries the torch of artists like BILLY BRAGG, RICK SPRINGFIELD and THE REPLACEMENTS. Each song takes us on a journey through his healing with driving guitars, huge drums, and hints of organ, piano and cello when the mood calls for it. Fans of his previous work as THE CASTING OUT will find a familiar energy in Working Title.   In his new, more positive look at life, Gray reminds us that it is human to struggle and that there is healing in community. None of us are ever meant to go to battle alone.