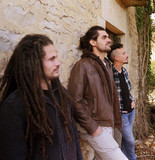 Wildation is an electrifying musical band of three childhood friends - Vince (Vincent Gerard), Bob (Etienne Blanchard) & Bill (Martin Chevrier). The trio, a Soul rock band is best known for their signature eclectic melodies resonated by audacious sound mixtures. Inspired by the utopia of a balance between nature and civilization, “WILDATION,” represents a humanity without development, its impact, and essence. Since 2019, the band has created powerful music and have earned multiple gigs. The band released its debut EP titled, “First Seeds” in April 2020. The francophone band wants their music heard and appreciated for its content and uniqueness. Likewise, the essence of the trio is to connect humanity to its roots, spreading real energy across the globe one piece at a time. With a full expression of vocals, guitars, bass guitar, keyboard, saxophone, and drums in their music, the band seeks for appeal among original and authentic music lovers. Wildation has a music style that focuses on both cheerful, upbeat music accompanied by skillful instrumentation. Although each member of the group is gifted in his way, the band is collectively a group of music makers whose passion stems from their soul. Vince, Bob & Bill are passionate music lovers, and jolly friends who desire to share their musicality with the world. Where there's quality music and a flare of uncontainable energy, there's wildation' music.