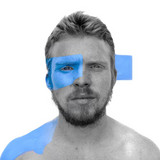 P.Smurf is an acclaimed Australian Hip-Hop MC, label manager at Scratches Records and co-founder of Sydney Independent Hip-Hop label, Big Village Records. While establishing strong repute through his collaborative projects Daily Meds, Reverse Polarities and Sketch the Rhyme, Smurf, as he’s colloquially known, has remained an integral part of the Hip Hop community for well over a decade. His genuine, charismatic presence and style both onstage and off, along with highly charged lyrics delivered with ferocity and percussive flows, have earned him a strong, loyal fan base. A unique and diverse fan base that feels more like a collective. You’ll catch them at every show, tuning in to every free style live stream, and screaming his infectious hooks at every performance. With numerous solo releases under his belt, including Smurf Village (2012), The Story So Far EP (2013), Playin’ The Blues LP (2018), to multiple mix-tapes and singles, all while touring extensively across the country, Smurf is no stranger to hard work and dedication to his craft. P.Smurf has played a fundamental part in each musical endeavour he’s involved with, most notably on Daily Meds widely successful debut release, Happy Daze. The album was shortlisted in the top 9 of the 2012 Australian Music Prize (AMP Awards) and was awarded FBI Radio’s “Album of the Week” whilst 3rd single “Insane” was put on high rotation by Triple J.