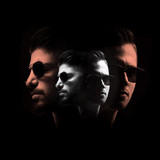 Ehaam band is a Persian band formed in Tehran in 2015. Ehaam was founded by Xaniar Khosravi. They have released two charting singles Taab O Tab (2018), Bezan Baran (2017) and several successful other singles since 2015. Ehaam is one of the first Persian Neo Pop groups and is credited with influencing genres such as Persian Folk, Persian Traditional Style and Pop. Xaniar Khosravi is a popular musician and singer who has founded Ehaam to present a different music style to the community showing how unique Iranian music can be. Many Iranian actors such as Vishka Asayesh, Amir Aghaei and Mani Alijani played a role in Ehaam's first music video.