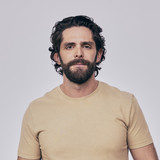 Ten years after signing his first record deal with Big Machine Label Group’s The Valory Music Co., the arena-packing superstar — dubbed “the most reliable maker of No. 1 singles in country music” (Variety) — has five studio albums, 18 MULTI-PLATINUM and GOLD-certified No. 1 singles and over 12 BILLION streams to his credit, as well as a 2019 ACM Awards Entertainer of the Year title and a coveted musical guest appearance on Saturday Night Live. He has been honored with eight ACM Awards, two CMA Awards, four GRAMMY® Awards nominations, plus trophies from the CMT Music Awards, Billboard Awards and iHeartRadio Awards, in addition to being recognized with two CMA Triple Play awards for penning three No. 1 songs within a 12-month period. Continuing his reign with the longest current active streak of consecutive No. 1s in the format (Mediabase/Country Aircheck Chart), Thomas Rhett has headlined multiple nationwide and international tours and some of music’s biggest festivals, remaining “at the top of his musical game” (Winnipeg Free Press), most recently wrapping up his headlining THE CENTER POINT ROAD TOUR. For more information, visit www.thomasrhett.com.