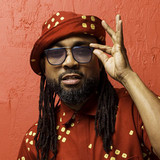 Known as the King of Soca, Machel Montano’s long and decorated career began in 1982 at the age of seven. Since then Machel has gone on to dominate the genre, winning countless awards, including 7 Soca Monarch Crowns & 10 Road March Titles, while pushing Soca music onto the international stage with growing velocity. Whether he’s selling out Madison Square Garden or rocking a 25,000 deep crowd at his namesake fete on home soil – Machel is an unmatched entertainer, an artist of growing global influence, and a man on a mission. In 2016, Machel starred in and Executive Produced the film Bazodee, which has premiered in the US, Canada and throughout the Caribbean, while breaking boxing office records at home in Trinidad & Tobago! 35 years in, most artists would be content with these pinnacles of achievement – but for Machel, this is only the beginning.