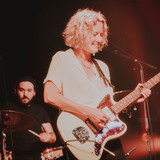 Joyfully crazy and naive, the Brussels band Annabel Lee has, since its debut in January 2017, decided to rush with nonchalance. A first single called "Best Good Friend" surfs successfully on the radio and becomes the flagship of a dazzling first EP called "Wallflowers", a true digest of pop rock and garage melodies. A few explosive live shows (Botanique, Eurosonic's off, opening for Parquet Courts) then finish installing them on the radar of the belgian garage rock scene. Around the singer and guitarist Audrey, Vankou at the bass and Hugo at the drums, are a perfect cross between the worlds of Courtney Barnett and Best Coast. Together, they wrote their first album Let the Kid Go, released in March 2020. The 90’s spirit is still part of the recipe, but it’s mostly the effective writing and the strong personality that emerges from their songs that are praised by critics. Annabel Lee is only waiting for one thing: to be able to defend this album live as it should be. In June 2021, the group wins the Octave de la Musique for “2020 Best pop-rock album”, just before leaving for the Printemps de Bourges festival (France) to represent Belgium. They are back this Fall (September 24, 2021) with an Extended Edition of their album Let the Kid Go containing unreleased tracks and acoustic versions.