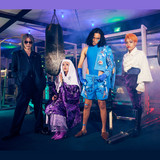 QUEEN BEE a four-piece band formed in 2009 at Kobe by AVU (Vo), YASHI (Ba), RURI (Dr) and HIBARI (Gt). The band first made headlines when they were chosen to play on the extremely selective "ROOKIE A GO-GO" stage at Japan's largest outdoor music festival, FUJI ROCK FESTIVAL. Singing in both low and high pitch, the extremely unique main vocal along with the band’s creative and eccentric performance made them the talk of the music scene before they were even debuted. After releasing their 5th album "Q"

in April 2017, the band kicked off to a sold-out national tour that included 15 shows. Later that year, the band performed in the musical production of “ROCKY HORROR SHOW (Jap ver.)” featuring AVU as one of the main cast. In 2018, QUEEN BEE released a new single "HALF" which is the theme song of the highly anticipated anime “Tokyo Ghoul：re“ that was premiered in Spring 2018.