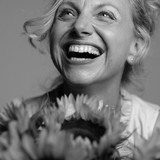 Liza’s varied career has encompassed music, theatre and comedy. Renowned for being one third of the British satirical comedy group, Fascinating Aida, Liza has also established herself as a unique solo singer and performer. Liza’s upbringing gave her a deep love of the music of the 20’s, 30’s and 40’s, from where she draws a lot of her inspiration. After training at the Guildhall School of Music and Drama she joined Glyndebourne, enjoying roles in many of the company’s leading productions. She also performed with the D’Oyly Carte and Carl Rosa companies playing the leads in operettas by Offenbach and Gilbert and Sullivan. In 2004 Liza joined the award-winning comedy trio Fascinating Aida and remains a member until this present day. Fascinating Aida have toured all over the World and continue to sell-out theatres all over the UK. As a solo artist Liza has collaborated with the brilliant Jazz pianist Gareth Williams on her show Liza Sings Harold Arlen and with The Brighouse & Rastrick for performances of her Liza Sings Streisand show. She performs regularly with her own band, alongside her MD Joseph Atkins and has toured all over the UK with her shows Songs of Hollywood and Liza Sings Streisand. Liza performs regularly in London and in 2019, she took her acclaimed 5* show, Liza Sings Streisand, to the Lyric Theatre for a successful run of shows. In 2020 Liza worked with esteemed record producer Chris Porter, to record her long awaited solo album The Heart Of It.