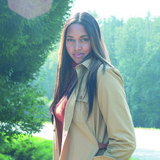 Cassandra Steen is a German contemporary R&B singer known for solo hits such as "Darum Leben Wir" as well as guest features on hits by Bushido, Xavier Naidoo, and others. Born on February 9, 1980, in Ostfildern-Ruit, Baden-Württemberg, she made her recording debut in 1997 on the song "Telefonterror" from the album Quadratur des Kreises by German rap group Freundeskreis. A few years later she emerged as a member of the group Glashaus on the label Pelham Power Productions (3P). Comprised also of producers Moses Pelham and Martin Haas, Glashaus made their commercial debut in 2001 with an eponymous album and the Top Five hit single "Wenn Das Liebe Ist." Successive albums Glashaus II (Jah Sound System) (2002) and Drei (2005) were commercially successful as well, reaching numbers 16 and four on the German albums chart and spawning three singles each. In the meantime, Steen made her solo album debut in 2003 with Seele mit Herz, a full-length effort on 3P. After leaving the 3P camp, Steen was frequently featured as a vocalist on German rap songs; most notably, she was featured on Bushido's Top 30 hit single "Hoffnung Stirbt Zuletzt" (2004), plus another of the superstar rapper's songs the following year, "Bis Wir uns Wiedersehen" (2005). Other high-profile guest features followed, including the hit singles "Eines Tages" (2006) by Azad and "Wann" (2008) by Xavier Naidoo.