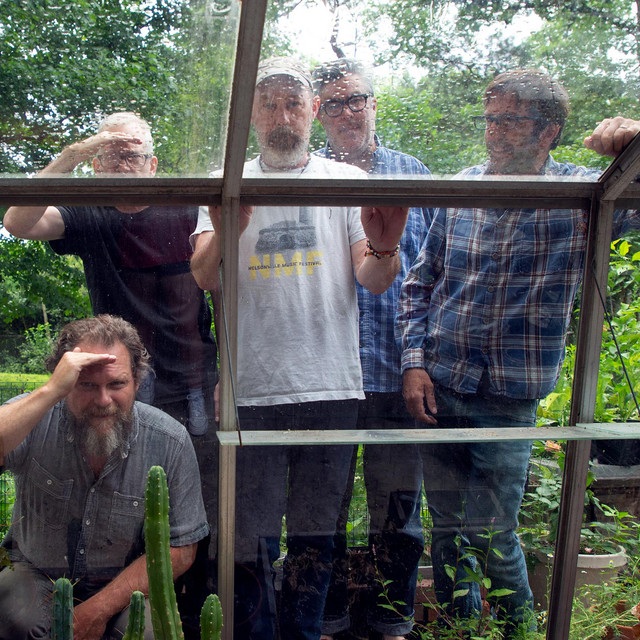 Columbus, Ohio’s Moviola is a music and art-making collective of five longtime friends that have blissfully existed on the DIY fringe for nearly 26 years, releasing eight records from 1994-2007 that ran the gamut from 4-track fuzz-pop to hi-fi folk to noisy country. Five equal singers and songwriters—the whole is greater than the parts. This May, after 13 years away, they return with their ninth record, Scrape and Cuss on their new label, No Heroics. At the same time, they are releasing remastered versions of their entire back catalog, streaming all eight albums, nearly all available for the first time.   Started by Jake Housh in 1993 in a duplex near Ohio State, the band, on early 45s and 1994’s Frantic sounded less like their Columbus punk contemporaries, and more like “Neil Young’s noisy nephews” (LA Weekly). In quick succession, The Year You Were Born (1997), Glen Echo Autoharp (1998), and The Durable Dream (1999) saw the core quartet of Housh, Ted Hattemer, Scotty Tabachnick, and Jerry Dannemiller cover wide sonic turf, traversing buzzing lo-fi rock, Space Echo® folk, and pure pop arrangements. Drummer Greg Bonnell joined at the turn of the century, and Rumors of the Faithful (2001), East of Eager (2004) and Dead Knowledge (2007) came next. A singles compilation, Broken Horses (2008), concluded Moviola’s first phase as we know it. Basic tracks for Scrape and Cuss were recorded over a week in July 2019, with all five members together in Housh’s home studio.