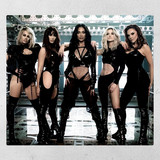 A dynamic pop outfit with burlesque roots, the Pussycat Dolls make dance-oriented anthems infused with electronic, hip-hop, and R&B influences. Rising out of the famed Los Angeles neo-burlesque troupe of the same name, the Pussycat Dolls gained widespread fame with their 2005 Top Five Billboard debut, PCD, which spawned the hit singles "Don't Cha," "Stickwitu," and "Buttons." The group remained chart favorites with their follow-up, 2008's Doll Domination, and appeared on their own reality show before disbanding in 2010. In 2019, the Pussycat Dolls reunited, singing their song "React" on the U.K.'s X Factor: Celebrity finale. Founded by choreographer Robin Antin in 1995 in Los Angeles, the Pussycat Dolls initially began as a modern burlesque dance revue based out of the Viper Room nightclub. Under Antin's creative guidance, the Dolls gained buzz with their saucy dance routines set to a mix of songs from the '50s and '60s. By 2001, the group had re-established themselves at Los Angeles' Roxy nightclub, a period that also found them attracting actresses and models who wanted to become a Pussycat Doll for a night. Christina Aguilera, Pamela Anderson, Kelly Osbourne, P!nk, Britney Spears, Carmen Electra, and Gwen Stefani were just some of the names who performed alongside the Dolls during their flirtatious cabaret shows. The attention helped land the group an appearance in the 2003 film Charlie's Angels: Full Throttle, followed by numerous television appearances, most with Carmen Electra. Building upon the group's growing popularity, Antin signed a development deal with Interscope Records and began transforming them into a full-fledged pop outfit. By 2003, the Pussycat Dolls' lineup had solidified around lead singer (and former Eden's Crush member) Nicole Scherzinger, as well as members Carmit Bachar, Ashley Roberts, Jessica Sutta, Melody Thornton, and Kimberly Wyatt. In April 2005, they released the Cee Lo Green-produced single "Don't Cha" with special guest Busta Rhymes. The song climbed to number two on the Billboard Hot 100 chart and number one on the Dance Club Songs chart. The group's full-length debut, PCD, followed that September and featured production and songwriting contributions from will.i.am, Timbaland, Ron Fair, and others. It hit number five on the Billboard 200. Along with "Don't Cha," the album spawned several more number one hit singles, including "Buttons" and "Stickwitu," the latter of which earned a Grammy nomination for Best Pop Performance by a Duo or Group with Vocals. In March 2008, original member Bachar left to pursue a solo career. Continuing as a five-piece, the Pussycat Dolls released their sophomore album, Doll Domination, that September. Buoyed by the Top Ten single "When I Grow Up," the album landed at number four on the Billboard 200. Following the group's 2009 world tour, rumors began to swirl regarding tension within the ensemble. Subsequently, by the end of 2010, the Pussycat Dolls had effectively disbanded. Following the group's break-up, Scherzinger began focusing on her solo work, releasing 2011's Killer Love and 2014's Big Fat Lie. By 2017, rumors began to circulate that the Pussycat Dolls were considering a reunion. Finally, in November 2019, Scherzinger and several former members of the Pussycat Dolls did reunite, performing a medley of their hits, including "Buttons," "When I Grow Up," and "Don't Cha," as well as a new song "React," on the finale of Britain's The X Factor: Celebrity. Following the reunion the group embarked on a live tour and guested on singer Meghan Trainor's song "Genetics" off her 2020 album Treat Myself. ~ Matt Collar, Rovi