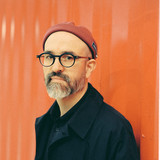 Marc Melià is a Majorca born composer and musician who currently lives in Brussels. For the last ten years he has been composing, producing and playing music in several bands including the pan-european trio Lonely Drifter Karen among them with whom he released 3 albums on the Belgium label Crammed Discs. ‘Music for Prophet’, his first solo album, it’s part of the new born tradition of the repetitive music composed by sensitive robots for the humans of tomorrow. The protagonist of the album, from where all the mystical loops, giant statues of arpeggios and the big variety of electronic landscapes post-Kraftwerk are born it’s called Prophet 08, an already mythical synthesizer. New album "Veus" out October 15 on Pan European Recording New album "Veus" out October 15 on Pan European Recording