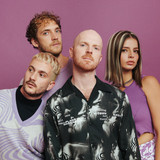 After the massive success of ARIA-certified gold single 'Heavy Hearted’, The Jungle Giants are back with indie dance number ‘Sending Me Ur Loving’. With trademark jangly guitars and a beat that won’t let you sit still, ‘Sending Me Ur Loving’ was written and produced by the band’s lead singer Sam Hales. Over the next few months, The Jungle Giants will be sending some loving all around the world as they embark on one of their biggest tours yet, with dates announced for the US, Canada, Mexico, UK, France, the Netherlands and Japan. ‘Heavy Hearted’ was played on high rotation on radio around the country, saw multiple sold out headline shows in The Jungle Giants’ biggest Australian venues to date, and is sure to place well in the upcoming triple j Hottest 100. The band’s last appearance in the Hottest 100 resulted in 4 songs in the countdown, a huge feat for an independent Australian band. The Jungle Giants are still on a career high after the release of third album Quiet Ferocity, which produced two ARIA-certified Platinum singles 'Feel The Way I Do' and 'Used To Be In Love', two ARIA-certified Gold singles in 'Bad Dream' and 'On Your Way Down' and two sold out headline Australian tours.