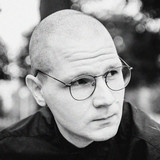 “Arturs Skutelis is one of the most renowned Latvian rap artists; front-man of live music band Tvērumi and founder of the legendary PKI recording studio and collective that completely transformed the sound of local hip-hop scene in the late 2000s. His never-ending search for new forms of expression has shaped a very distinctive creative pattern, interwoven by a symbiosis of golden-age and new school hip-hop, influences from avant-garde and jazz, as well as references to the greatest authors in human history. Skillfully told stories, masterful control of language, an endless supply of witty metaphors and wordplay in the very best traditions of hip-hop lyricism is what makes Arturs one of the all-time best and most important characters of Latvian underground rap scene.” – Juris Civilis