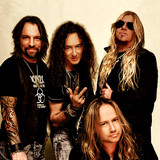 If you ask the fans of German hard rock act Voodoo Circle about the most impressive line-up in the band’s history, they will vote almost unanimously for the one that recorded the second album Broken Heart Syndrome (2011). At that time, band mastermind, guitarist and main songwriter Alex Beyrodt was supported by three excellent musicians, namely vocalist David Readman (Pink Cream 69), bassist Mat Sinner (Primal Fear, Sinner) and drummer Markus Kullman (Glenn Hughes, among others). So it comes as no surprise that Beyrodt is proud and happy to be able to present the return of that outstanding team on Voodoo Circle’s latest release, Locked & Loaded. “This constellation presents Voodoo Circle at its strongest, especially since the new material is practically tailored to our classic line-up,” the exceptional guitarist explains. Talking of well worth the effort: another investment in pure quality was the decision to enlist once more the support of Jacob Hansen, the Danish godfather of sound, to mix and master Locked & Loaded. “Jacob is a real sorcerer with magic hands,” says Beyrodt on the subject of Hansen, but in fact he could also pass that compliment on to himself and his first-rate line-up!