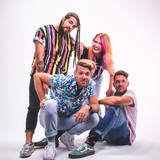 Attaboy is an indie-pop band from Fort Wayne, Indiana that has gained national recognition. They have performed for more than two thousand audiences across North America and Europe. While on tour, the band has opened for multiple Grammy Award-winning artists. In addition to winning three international songwriting contests, several of their songs have received national radio airplay, including four singles that landed on The Billboard Top 30 Charts. All that adds up to an energetic and memorable live performance, coming soon to a city near you.