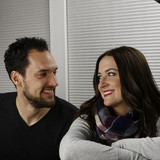 Founded in 2014, Brooklyn Duo has quickly established itself as one of today’s most successful classical crossover ensembles. Through its creative arrangements and live video performances, the piano and cello duo has garnered a huge following, with over 1 million YouTube subscribers, and over 150 million streams annually on platforms such as Spotify and Pandora Radio. Their music has been used in numerous television shows, including Grey's Anatomy, Pretty Little Liars, Zoey's Extraordinary Playlist, America's Got Talent, and most recently during the 2020 Democratic National Convention. Members Marnie and Patrick Laird met while students at the same chamber music festival and were married in 2012. Both worked as professional musicians after graduating from the Juilliard and Eastman schools of music, respectively; Patrick as a founding member of popular cello rock band, Break of Reality, and Marnie as principal pianist of the New World Symphony. In 2014, on a whim, the couple recorded two covers (Shakira's “Empire” and John Legend's “All of Me”) and released them on YouTube. They were thrilled when Shakira herself took notice of their cover and tweeted about it. The boost from that exposure and the positive response they were getting on YouTube encouraged them to continue creating videos. Since then, Marnie and Patrick have released over 100 videos on their Brooklyn Duo YouTube channel and 10 albums of covers, spanning artists from The Beatles to Metallica to Taylor Swift.