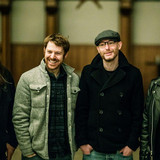 From a White Hotel is an album years in the making — some would say 38 years in the making — and so it makes sense that the new Kasey Anderson album, due July 27 on Jullian Records (just six days after Kasey and Caitlin will hold their wedding ceremony), won’t bear Kasey’s name on the cover. It’s not the next anything. It’s the first Hawks and Doves record; the work of a revived man with a restored creative vision, surrounded by the people who helped revive and restore him. “I ain’t no Steve Earle,” Kasey sings in “Clothes Off My Back,” as the album’s penultimate track soars to a close, “but I feel alright.” From a White Hotel is an album shot through with honesty and wit, but those lines ring out clearly as an admission: the road ahead is long and challenging, and Kasey’s journey towards reconciliation and redemption nowhere near its end. The good news for the rest of us travelers is that we’ve got Kasey Anderson back among us.