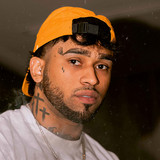 Bryant Myers is a reggaeton singer, rapper, and producer closely associated with the 21st century generation of Latin trap artists. His nickname is "El Más Chamaquito de la Nueva." Though best known as a collaborator with Farruko, Ñengo Flow, TempoKevin Roldan, and Anuel AA, his own singles and videos have garnered millions of plays on social media. His trademark is a deep, raspy-toned, slow vocal style always unadorned by production elements. Myers was born in Loma Alto, Carolina Puerto Rico. He began sampling and making his own singles in 2013 and launched them on social media via his SoundCloud, Instagram, and YouTube accounts. His single "Esclava" put him on the radar with a slew of reggaeton and urban artists, and he participated in a series of collaborations with charting acts. He followed it with "Esclava Remix feat. Anonimus" (his cousin Luis Beauchamp) and Anuel AA y Almighty. The latter track garnered over a million views on YouTube in less than three months. Follow-up singles "Tu Me Enamorate" and its remix with Lary Over and Brytiago, as well as "De Camino a Marte," did just as well. Myers has continued to issue digital and video singles at a rate of at least one a month since then. In June 2016, he released "Vente Encima ft. Anonimus, Noriel & Riko El Bendecido" and guested on DJ Nelson's "Volverte a Ver" and Noriel's "La Llamada Remix." In July, he was a featured guest on Farruko's hit single "Ella y Yo" along with Almighty and Anuel AA, and "Esclava" was re-released as a digital download. In 2018, Myers issued his debut full-length, La Oscuridad, featuring guests Plan B, Bad Bunny, Farruko, and more. It landed at number six on the Billboard Top Independent Albums chart. His sophomore album, Bendecido, arrived in October 2020 and again featured a bevy guests, including Arcangel, Nicky Jam, Rauw Alejandro, and others. ~ Thom Jurek, Rovi