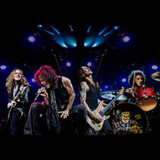 It all started when four Boston-bred kids joined forces in the late 80s to form Extreme. With an original new sound and groundbreaking records, the foursome was immediately recognized as innovators in the world of rock & roll. The band has described their music as "Funky Metal" in the early days, but it would evolve much more in the mid-90s by blending classic rock influences with post-grunge and alternative rock. To date, the Grammy-nominated EXTREME have released five albums, plus a greatest hits set—selling over 10 million records worldwide. They also achieved a #1 hit single, “More Than Words”—from their 1990 multi-platinum album Extreme II: Pornograffitti—on the Billboard Hot 100, which they followed with the Top Five “Hole Hearted.”