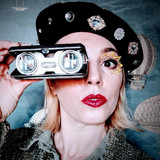 MALKA first made waves on the music scene as Tamara Schlesinger, the front- woman of acclaimed alt-folk collective 6 Day Riot and also as a prolific songwriter. Her past work has been included in a host of high-profile syncs for TV series and Hollywood blockbusters – most notably Skins, Scream 4 and 127 Hours. Now as MALKA - she weaves mesmeric percussive rhythms among a charge of irresistible call and response chants and instantaneous melodies. The carnival of global sounds are intertwined with an explorative life affirming message. Her highly praised albums have received steady support at 6music from the likes of Lauren Laverne and Steve Lamacq and syncs on Catfish on MTV, The Home Depot advert and various shows on Netflix. Her music has also found favour on Radio 1, Amazing Radio and has been playlisted on BBC Radio Scotland. Both ‘Ratatatat’ and ‘Marching to Another Beat’ have received coverage in high profile press such as The Independent, The Skinny, The Line Of Best Fit and Drowned In Sound. Tamara and her live band have played a host of foot stomping live shows including Bestival, Secret Garden Party, Fringe by The Sea, XPO North and support slots with Fujiya and Miyagi and Tim Minchin. MALKA's recent album 'I'm Not Your Soldier' has seen support at BBC 6music, BBC Radio 1 and BBC Scotland along with widespread critical acclaim across the press.