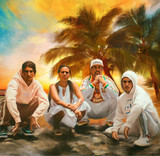 Formed on the mystical island of Kauai, The Lambsbread is one of the foundational roots reggae artists' of Hawaii. Delivering a positive message of love and unity, The Lambsbread is known around the world for their conscious message and hard roots riddims. The foundation was set by vocalists Kaya and Nadia in 2003, coming together to create a life and legacy of music. their first single "Love in the House" (ZION HIGH PRODUCTIONS) was released on 45 in Jamaica alongside tunes from Capleton, Yami Bolo, Turbulence, Lutan Fyah, and Jahdan Blackkamore. This was the first time an artist from Hawaii was ever released on Jamaican vinyl. The tune was a hit and ended up on radio shows, mixtapes, and sound systems around the world, giving The Lambsbread their first international exposure. The Lambsbread's latest release “WORLD NEEDS LOVE” is an essential album bound in positivity, reality, and livity. Each album has had a unique and original vibration and their fifth release is a natural progression. the lambsbread has a consistent talent to build songs that appeal universally, and the title track is a pulsating observation of worldly tribulations. The Lambsbreads' works on this album have been elevated with crucial combinations alongside Sizzla on "Roots and Culture" and Morgan Heritage on "Feel The Vibes". Their catalog is bound by truth and conviction, and their ability to link with a royal roll call of the best in the business allows pure engagement of heart and soul.