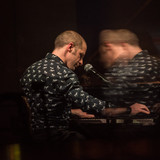 Ivo Neame is an award-winning multi-instrumentalist, composer and arranger. As a pianist he is a vital cog in several of European jazz’s most forward-looking groups including Phronesis and the Marius Neset Quintet. With his own groups and as a sideman he has appeared at jazz festivals worldwide. Ivo's music is a living, breathing contradiction - complex yet accessible, considered yet spontaneous, traditional yet forward-thinking. Ivo studied at the Royal Academy of Music, and since leaving in 2003 he has performed and recorded with highly esteemed musicians at home and abroad such as David Binney, Kenny Wheeler and Hermeto Pascoal. He has also played on more than 50 albums as a sideman and a leader.