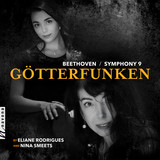 Born in Rio de Janeiro, Eliane Rodrigues was quickly identified to be a musical child prodigy. Her talent was discovered early on and was fostered by Helena Gallo, then Arnaldo Estrella, who himself was a student of Alfred Cortot and Yves Nat. At the age of three she started composing before she could even read or write notes. By the time she was seven her compositions had resulted in two piano methods. In addition to this she played her first recital at the age of five and made her first TV appearance a year later in which she played Haydn's Piano Concerto in D major with the Orquestra Sinfonica Nacional. Just a year later she played Mozart's Piano Concerto No. 23 in A major (K. 488), once again with the National Symphony Orchestra. From that moment on she won prizes at numerous regional and national competitions, going on to win the special prize and the Gina Bachauer prize at the Van Cliburn Competition in the USA when she was just 18. After this she moved to Belgium, continuing her studies with Jacques Detiège (a student of Leon Fleischer and Maria Curcio). She won first place at many national competitions and reached fifth place at the Queen Elisabeth Competition in 1983. This lifted her career to international acclaim. Next to performing on stage she is also professor at the Royal Conservatoire of Antwerp. She has recorded over 25 CDs of both live concerts and studio albums.