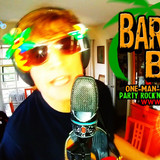 Barefoot Bob plays his big fun beach concoction of party rock'n'roll, reggae, surf, ska, blues and more, with a huge vault of original and cover songs (he's written over 500 songs). Based in Western Canada and Mazatlan, Barefoot Bob performs all over with his One-Man-Beach-Party-Band show as well as with his full band Barefoot Bob & the Dudes, featuring Dave Farhall bass and Jeremy Seatter on drums. "It's impossible not to be swept up in the carefree nature of this fresh-sounding slate of tunes. A signature style? Diversity is the key - the guys deftly weave together threads of rock, folk, and roots. Inject a touch of reggae, and you come close to pinpointing their unmistakable sound."

- Red Deer Express. "Cook and his band can, at times, really, er, heat things up. But, again, they cool things off and lighten things up with singalong lyrics that usually fall on the Jimmy Buffet side of seriousness... the band incorporates an incredible variety of styles and sounds into their material" Calgary Sun, Calgary, AB "Cook's singing voice did credit to good-timey rock n' roll songs, as did his Elvis-like dance moves, antics channeling Jerry Lee Lewis, and fashion sense courtesy of Jeff Spicoli. The band traversed from rock n' roll to reggae to silly to blues to love in the space of the same number of songs... they were executed with great talent and enthusiasm."