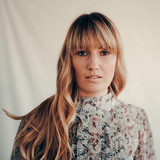 Robyn Sherwell is a London-based singer-songwriter. Raised on the island of Guernsey, her early releases garnered support from Jo Whiley, Lauren Laverne and Huw Stevens, and she was quickly invited to the BBC Introducing stage at Glastonbury Festival in 2015, with her debut album following in 2016. Produced by David Kosten (Bat For Lashes, Everything Everything), it features the empowering tribal single “Islander”, an ode to her homeland, the glacially introspective "Love Somebody", and her spellbinding cover of Fleetwood Mac’s 1975 classic, “Landslide”, which Jo Whiley played twice in one show. Reviewers declared Sherwell’s eponymous record “The first flowering of a significant new voice” (The Guardian),

and “A record of dark beauty" (DrunkenWereWolf), establishing her as a fresh standout voice in the realm of confessional electro pop. After a four-year hiatus, during which time she became a mother, Robyn returned, rejuvenated, with a stunning new collection of personal, self-produced electro-pop tracks,