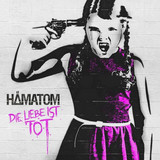 From North to South and from East to West. From a cellar vault in 2004 to "BESTIE DER FREIHEIT"

entering the German album charts at #2: after their first musical meeting, these 4 musicians set out to form a band from off of the usual metal path. Names and faces should not play any role, only the music in the foreground. The pseudonyms Nord (north), Sued (south), West (west) and Ost (east) emerged and together with the masks laid the foundation stone of the overall concept. Clear words and brutal melodies, which translate live with unrestrained energy. The band’s live shows were becoming ever more sophisticated and inspiring on their very well received headlining and support tours and on countless festival European wide (WITH FULLFORCE, SUMMERBREEZE, M'ERA LUNA, WAVE GOTHIK TREFFEN, SOFIA-ROCKS-FESTIVAL) in Bulgaria as main support for Rammstein or on the FULL METAL CRUISE and, of course, the WACKEN OPEN AIR.