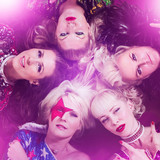 Cocktail Slippers is a rockband from Oslo, Norway, known for their great rock & roll songs, brilliant live-performances and long-time cooperation with Little Steven Van Zandt from Bruce Springsteen and the E-Street band.   The last decade The Cocktail Slippers girls have been touring most of Europe and quite a bit in the USA. To mention a few: Live at The Hard Rock, Times Square in New York, SXSW in Austin, Texas, Hard Rock Calling in Hyde Park, London and live at the legendary The Cavern in Liverpool.    «In full hosanna, The Cocktail Slippers sounds a lot like the Go-Go´s but with gats instead of L.A. cheer, and a mule kick in their high heels. It´s all retro action but written and detonated with the study and delight of modern rock &amp; roll women in constant touch with their inner filly» -David Fricke, Rolling Stone Magazine