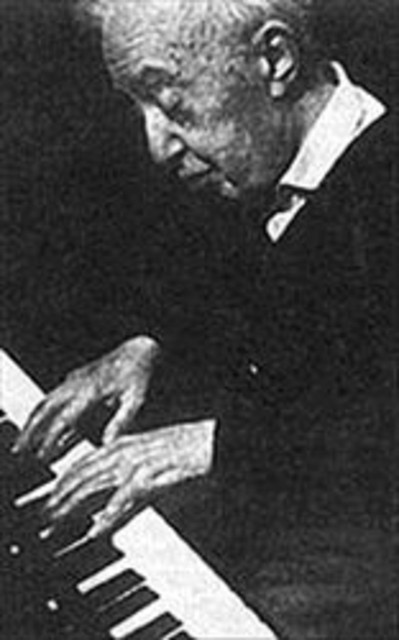 Polish-born pianist Mieczyslaw Horszowski performed his last recital at age 99, slightly more than a year before his death in 1993. Although his recording career only goes back to 1936, the traditions of playing he represented are much older than that, dating back to the early Romantic era. He was taught to play the piano by his mother, a student of one of Chopin's students, and his main teacher, Theodor Leschetizky, was a protégé of Czerny. Horszowski was playing (and transposing) Bach inventions at age five; at eight he was presented to the public as a prodigy, and at ten he began his formal career. He played for Fauré and perhaps Saint-Saëns in 1905 and made his U.S. debut, at Carnegie Hall, the following year. It was also during 1906 that he met the youthful Pablo Casals and Arturo Toscanini, who became lifelong friends and collaborators. Horszowski was especially noted as a chamber music pianist and became a fixture of Casals' Prades Festival for many years. Interrupting his high-flying career to pursue a humanities degree at the Sorbonne in Paris from 1911 to 1913, Horszowski moved to Milan during the war and remained there until 1939, touring internationally. As World War II broke out he was appearing in Brazil, and instead of returning to Europe he headed for the U.S., where he remained for the rest of his life. Horszowski quickly found performing opportunities with Toscanini's NBC Symphony, and he began teaching at Philadelphia's Curtis Institute in 1942. He was a fixture of New York's recital scene, performing complete cycles of Beethoven's piano works and Mozart sonatas and concertos, and he appeared at the White House in 1961 and 1978. Horszowski was the first person to record while playing the first known piano constructed, an instrument built in 1720 by Bartolomeo Cristofori and housed in the collection of the Metropolitan Museum of Art in New York. In 1981, at age 89, Horszowski married for the first time; his wife was Italian pianist Beatrice Costa. His eyesight declined, which put an end to his concerto and chamber music performances, but he continued his solo recital career, performing from memory. At the Curtis Institute he taught an impressive roster of students, including Anton Kuerti, Murray Perahia, and Richard Goode. Horszowski played a range of music but focused on Bach, Beethoven, and Chopin, and even in his last years he essayed difficult works like Beethoven's Diabelli Variations.