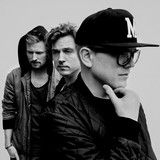 Danish electro-pop outfit Carpark North released their first album, Carpark North, in 2004. The group -- Lau Højen, Søren Balsner, and Morten Thorhauge -- scored a big hit with its eponymous full-length, with the single "Transparent and Glasslike" hitting the number two spot on the Danish charts. The follow-up full-length, All Things to All People, was released in 2005. The album, while not a chart-topper like their first album, still managed to crack the Top Five and continue the band's home nation momentum. A third album, Grateful, was released in 2008. Carpark North also had the honor of having a track -- "Human" -- featured on the Electronic Arts hit video game FIFA 08. ~ Chris True, Rovi