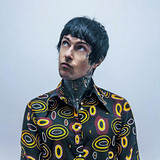 Behind the curtain of any story of success is an account of a tenacious struggle, a relentless drive, and a perseverance through hardship and loss. This sentiment rings true of experimental art-rocker, Brandy Row. Brandy Row is an artist, born and raised in a small town on the outskirts of East London. He grew up surrounded by musical sub-culture and multi-culture, which has had a subconscious impact on his creative drive. From a council estate upbringing and hailing from 4 generations of milkman, Brandy takes time to recount on his younger years, reflecting on times of adversity that have now shaped the honesty and urgency of his creative process. Brandy cut his teeth playing in a range of bands over the years but has always followed a solo-artist path. This has been his focus over the last decade. Brandy’s source of influence traverses many decades along the musical landscape, but his closest influences stem from the 30’s blues movements - the 50's and 60's cannon of deep blues and folk - 70's Rock'n'Roll

- New Orleans Funk and Soul. Brandy’s music is thought provoking, layered, atmospheric and can be mirrored to the likes of Tom Waits, Nick Cave and Bob Dylan. It is important for the listener to ask questions of the lyrics and the music itself. Brandy opens his book of eternal questions and lyrically prompts the listener to join him on the psychedelic ride, whilst commentating on political, metaphysical, spiritual, social and personal questions. CRAZY WORLD OUT NOW