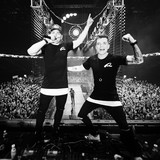 <div>RADISTAI DJs are one of the most popular EDM superstars in Lithuania. Jonas Nainys and Rolandas Mackevicius are best known TV and radio personalities with many successful shows under their belts. Madly famous duo has almost 300 thousands followers on Facebook, more than 25 million views on YouTube channel and more than 300 thousands on Instagram. Those numbers are one of the largest in Lithuania.</div><div> RADISTAI, known because of sharp humor and intelligent sense in dance music, run their own EDM music festivals (Radistai Village, Radistai Castle to name but a few) and every year gathering massive crowds of EDM music lovers. Both DJs are respected songwriters and producers. Radistai DJs (ft. Justinas Jarutis) - At The Sun: http://bit.ly/1Gso2YT </div><div> In the yeard of 2017 RADISTAI DJs were nominated for “Best Electronica” and were given a special award. In the summer duo released second studio album “On Road” which is following their hugely popular debut album “On Air” (2013). On both albums DJs were working with some of the biggest artists from Lithuania’s music scene. </div><div> RADISTAI DJs establish themselves as the largest EDM stars in the region. The future shines bright because RADISTAI DJs never stops! </div>