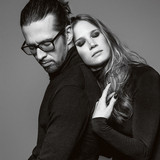 Ivy Flindt is an exceptional indie pop duo comprised of members Cate Martin (vocals, organ) and Micha Holland (guitar). Their album, In Every Move, is produced by Per Sunding, best known for his work with The Cardigans.Their music resembles nordic vastness, with confessions of devotion and retreat, while breathing melancholy with every note and recommended to the fans of Feist, Beth Gibbons of Portishead, Imogen Heap, Sia, The Cranberries and Dido. The two-piece have tallied international airplay throughout the U.S., UK, Australia, Germany, South Africa, South American, India and China. In addition to music, Cate is a Hamburg-based visual artist, whose work focuses on painting and photography in the field of abstraction in a pluralist manner, while Micha is also a photographer; both of their artwork is featured in their LP and CD.