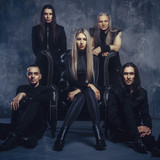 Alkonost is a Russian folk metal band formed in 1995 in Naberezhnye Chelny, Tatarstan, Russia. Starting small and gradually creating a local Russian fan base, they are now known to rock fans throughout Eastern and Northern Europe, South and North America. The material of the group is based on Russian paganism and mythology, and the melodies are taken from local Russian folk music, but the arrangements and riffs are taken from power metal, death metal and symphonic metal, consisting of simplified chords for complex “grinding” of lead. guitar (typical for power metal), coarse male coarse vocals (found in death metal) and soaring female opera vocals (as in symphonic metal). This led to the fact that they were classified in all these genres, as well as in the style of doom metal and folk metal.