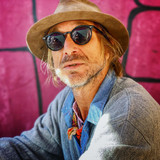 with this album i had the idea for the sound first, i think. i wanted to do what i was calling funk in back and busking up front with white album-y shit scattered about. i had done a lot of listening to and looking into parliament and james brown and lots of reggae music, too. i found this drum style they call fatback drums and started asking all my friends if they'd heard of it. there's one kid named robbie crowell who had played sax on a bulldogs show one time, aaron lee said he was a producer and played everything. i really dug having his input in the bulldogs, and then i heard midland had hired him to play drums. so i asked him if he'd heard of fatback, and he said it was the first style he learned to play. so he and i started hanging and listening to funk songs, and he gave me an education even further on all the drummers. i wanted to play bass myself. i made up the melodies on bass. i was trying to hold myself to one chord if i could. i only use more than one chord a few times on this. it wasn't my intention to sing the background vocals, but when i did it i thought it was funny. so i kept doing it. robbie and i would jam on the song all day, smoke some j's, try a bunch of grooves.  i'd play all kinds a stuff while we tracked knowing i wouldn’t keep it. we were just arranging it.