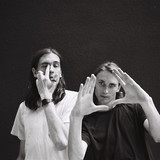 Otzeki - the project of cousins Mike Sharp and Joel Roberts - was born after a semi drunken jam on a partly functioning Yamaha AN200 drum machine and a Fender Jaguar guitar. Taking their name from a misremembered Russian author, their blend of carefully sourced electronics, luscious electric guitar and falsetto vocals has been the longstanding formula of the project which has seen them tour Europe, UK and USA. Vigorously awakening crowds to their contoured sound they are able to create an almost deadly, definitely dangerous live energy.. - The title of electronic-punk duo Otzeki’s new album couldn’t be more pertinent for these strange times. Inspired by the Truisms of artist Jenny Holzer, the message "Now is a Long Time" was written on a piece of paper and pinned above Mike Sharp’s bed at his Finsbury Park pad as he, along with cousin Joel Roberts, were writing the follow up to 2018’s debut record Binary Childhood. The message stuck and became the name for album two, culminating in the band spray painting the words across a billboard in Waterloo for its striking album artwork. The statement remained there for four weeks before being painted over. Mostly written on a laptop on the move, Now is a Long Time saw Otzeki embrace a quicker, more “instantaneous” writing process, resulting in a unique, infectious, and sonically-sprawling electronic effort, including the huge singles Max Wells-Demon and Sweet Sunshine. - Rory McKeown on album 'Now Is a Long Time' -