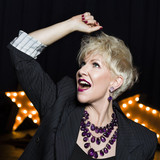 Mezzo-soprano Joyce DiDonato began her career with a string of critically acclaimed debuts, including at La Scala and Covent Garden, as well as triumphs on concert and recital stages. She rose from virtual anonymity in 1999 to international stardom by 2002, becoming one of the most sought-after coloratura mezzo-sopranos of the early 21st century. As a coloratura mezzo, some of her greatest successes have come in Baroque repertoire, particularly the operas of Handel, such as Alcina, Ariodante, Dejanira (Hercules), Elmira (Floridante), and Sesto (Giulio Cesare), and in Italian bel canto operas. Her performances are notable for the gleaming purity of her voice, her formidable technique, and her dramatically incisive characterizations. She is capable of projecting great power, as in Handel's Alcina, but is also excels in roles of lightness and humor, such as the heroines in Rossini's comedies. She has also sung many Mozart roles, including Cherubino (The Marriage of Figaro) and Donna Elvira (Don Giovanni), and while she has steered clear of Verdi and Puccini, her repertory includes Berlioz, Bellini, and contemporary composers like Michael Daugherty (Grace Kelly in Jackie O) and Jake Heggie (Sister Helen in Dead Man Walking). Her recital repertory takes in a range of works, from Handel duets to Spanish songs to Fauré's Mélodies to Bernstein's and other American songs. DiDonato's recordings are available on Virgin Classics, EMI, Hyperion, Naxos, Avie, Archiv, and TDK. DiDonato was born February 13, 1969, in Prairie Village, Kansas. She studied at Wichita State University, with the intention of teaching voice. By her 1992 graduation she had become interested in a career in opera and enrolled at the Academy of Vocal Arts in Philadelphia, with further training through programs at the opera companies in San Francisco, Santa Fe, and Houston. DiDonato had a string of successes in competitions, including a victory at the 1998 George London Competition, after which she gave her major debut at the Houston Grand Opera (1999) as Katerina Maslova in Tod Machover's Resurrection. Then came her spectacular 2000 debut at La Scala as Angelina in Rossini's La cenerentola, her stunning Rosina (Rossini's The Barber of Seville) at the Opéra Bastille in 2001, and her equally sensational Glyndebourne debut in 2003 as the Fox in Janácek's The Cunning Little Vixen. DiDonato's first major Handel recordings soon appeared to wide acclaim: the 2005 EMI Radamisto, 2007 Archiv Produktion Floridante, and 2009 Archiv Produktion Alcina. DiDonato debuted at the Met in 2005, singing Cherubino in Mozart's The Marriage of Figaro, and she continued to woo international audiences with her 2006 debut at Madrid's Teatro Real as the Composer in Richard Strauss' Ariadne auf Naxos. DiDonato's 2009 Virgin Classics recording, Furore, with conductor Christophe Rousset, consistently drew rave reviews while climbing high on the sales charts. After slipping on-stage and breaking her fibula during a July 2009 performance of Mozart's Il barbiere di Siviglia, DiDonato completing the remaining acts on crutches, then performed the remaining five shows from a wheelchair. In 2012, she won a Grammy Award for Best Classical Vocal Solo for her album Diva Divo. That same year she sang the role of Mary Stuart in Donizetti's Maria Stuarda, first in Houston, then reprising the role in 2013 at the Met. In September of that year, DiDonato's performance during Last Night of the Proms in Britain drew a good deal of praise, and in 2014 she was named a "Perspectives" artist for Carnegie Hall's 2014-2015 season, leading to collaborations with the English Concert conducted by Harry Bicket, the Brentano String Quartet, and the Philadelphia Orchestra under the baton of Maurizio Benini. Among her many 2015 appearances was one of civil activism at New York City gay bar the Stonewall Inn, where she honored victims of anti-gay hate crimes with a concert. The following year she won her second Grammy Award, this time for her performance in Joyce & Tony: Live at Wigmore Hall. In 2016, she released a collection of arias titled In War & Peace. In 2019, DiDonato issued the versatile Songplay, which paired jazz, Latin, and tango rhythms with Italian Baroque arias and picks from the Great American Songbook; this release won the 2020 Grammy Award for Best Solo Vocal Album.