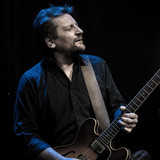 Jimmy Reiter has been playing with his band in clubs and on festival stages all over Europe for several years. Previously, he was the lead guitarist with US Blues singer/harmonica player Doug Jay in his band The Blue Jays as well as supporting player for numerous international Blues artists on their European tours. He released his first solo album, the award winning "High Priest of Nothing" in 2011, followed by "Told You So" in 2015

and "What You Need" in 2019, with guest appearances by sax players Amadee Castenell and Sax Gordon. After three studio albums, the time had come to release a live CD in 2021.