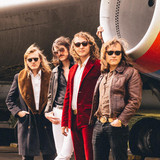 What will remain once you leave everything behind? Once you cut the grand gestures, the pressure, the expectations? What will remain when you just are? Oh, a hell of a lot. It is then that a distillate is showing – the thing that really counts. Pantha rhei, the ancient Greeks called it. “Runway Markings”, Okta Logue call it. And with it, they will change the music year of 2019 more that they are currently aware of. Okta Logue have crossed the sea of Psychedelia and truly swim free now. The shore they reached is their very own island of bliss, a place that makes them sound as natural, as animated, as serenely balanced as never before. However, it also made them sound as thoughtful and weary as never before. The fact that Okta Logue will sound like Okta Logue no matter what they do is some kind of boon and bane. They have such a distinctive sound, they would even be recognizable as an Electro project or a Jazz band. “In the past, our music was not shy of big Rock and pathos moments”, Benno Herz (vocals, bass) summarizes the evolution. “We wanted to replace that with a relaxed attitude and a deep sense of calmness. We wanted to renounce the grand Rock and Roll gesture.” The recordings with producer Johann Scheerer (Peter Doherty, At the Drive In) were what Herz calls a “very intimate process”: “Recording at Clouds Hill with Johann was a fantastic experience. We had our very own apartment under the studio and were practically making music nonstop. No distractions, pure focus.”