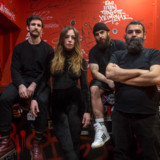 Amidst the continuous and enjoyable struggle the survivor of an indie rock n' roll band has become, Puta Volcano are building up their legacy and fanbase, one gig, one album, one song at the time.   Being a significant cog in the acknowledged machine that Greek heavy rock is, they keep pushing forward what was set in motion back in 2012, when their debut EP was released. Athens, Greece had already established its importance as the birthplace of new and exciting sounds and that is exactly what the creation of the debut album The Sun was in the period between 2012 - 2015. A fresh and inspiring offering, from a band that had just started rolling.   Rest is a luxury modern rock n' roll can't afford, so the engine had to rev again and the Harmony of Spheres album was already on the way. 2017 was the year that Puta Volcano planted their feet firmly to the ground and the mixture of Seattle grunge and sounds of the Californian desert came to be enhanced with an artistic quality and scent that set them apart and gave them a unique identity among the rest of the emerging bands. All that brings us today, where Puta Volcano have their new album ready, a ton of confident excitement for it and a series of plans to back it up. In November 2019 a deal with Sound Of Liberation booking agency was announced, while a 25-dates European tour is mapped out for Spring 2020.