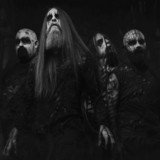 Mork was created by Thomas Eriksen in 2004 & was primarily a side-project from inception until the debut album, ‘Isebakke’, in 2013. Since then the band has rightly earned their accolade as one of the top Norwegian black metal acts of recent years, receiving strong endorsements from their peers. Following on mercilessly from 2020’s aptly titled ‘Pesta’ EP, Norwegian act Mork resumes its ascension through the ranks of the Scandinavian black metal scene with the fifth chapter, ‘Katedralen’, venturing ever further from the more primal early Darkthrone-based foundations, while still fundamentally keeping the grim flame of the old school in its DNA. ’Katedralen’ is undoubtedly Mork’s most accomplished work to date, pushing new creative frontiers with a more dynamic approach to the song composition and an expanded breadth to the riffs and melodies, weaving a new masterpiece of groove, harshness, grandiosity, sadness, beauty and power in the process. ‘Katedralen’ was performed, recorded & mixed by Eriksen himself, with mastering once more carried out by Jack Control at Enormous Door (Darkthrone). The album also notably includes guest appearances from Nocturno Culto of labelmates Darkthrone, Dolk of fellow countrmen Kampfar, & finally Eero Pöyry of doom masters Skepticism. The suitably stark artwork once again appears courtesy of revered French artist David Thiérrée.