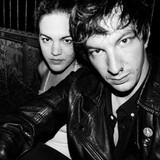 It was in May 2017 that Dany and Valquire first met each other at an apartment party in Berlin Schöneberg. Shortly afterwards the two enthusiasts booked a caravan at the Baltic Sea to produce their first tracks in seclusion of nature. While steadily developing an unique sound during intense studio sessions, schoeneberg already captured their audience in Berlin clubs. Because of their various approaches to music in general – both have played in different bands before – the two don't stick to one genre exclusively and want to create without boundaries. The sound of schoeneberg comprises elements of techno, dense basses and hypnotic vocals, or how The 405 Magazine wrote recently: "The best way to describe schoeneberg and what they bring to the game is pure and simple: versatility and determination." Currently schœneberg certainly focuses on producing techno, danceable tracks and playing in clubs or at festivals. Despite of the young age of the project, they already have been performing live shows in Berlin, Vienna and Graz. Other cities like Hamburg, Magdeburg and Basel will follow shortly. After releasing six Singles in recent months, schoeneberg will soon publish their first EP and are simultaneously working on an album.