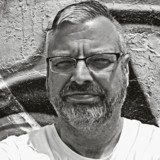 5OM (Robert Samsom) started producing the harder styles of house music in the early 1990’s in the group SPACE SEED which led to the release of an EP in 1994. After several appearances on compilations the group broke up around 1998. From there on he changed styles and produced Trance but didn’t released anything and he quits producing in 2004. In 2016 he starts producing Techno, and got his first release in 2017 on Drumquest. In 2018 he meets Mike Tierra and together they start a new Techno label called Intergrade Records.