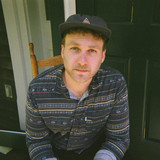 Cape Francis is the solo project of Kevin Olken Henthorn. Kevin started playing guitar when he was 9 years old and studied music with teachers ranging from classical to blues to metal, but by the time he was 15 he decided to commit solely to writing his own material. After years of touring in another project, Henthorn started Cape Francis as a way to break form and reconnect to a natural flow of storytelling. Influenced by the likes of Bon Iver, Angel Olsen, and Elliott Smith, Henthorn pulls from raw emotion and finds ways to approach them with warmth and introspection. Cape Francis is a re-approach to his relationship with an instrument after years of feeling stuck in strictly rhythm guitar. The outcome is a new sound centered around finger picked electric guitar, and surrounded by simple arrangements of percussion, synthesizers and horns. His sophomore LP Deep Water, is due out on Sleep Well Records in March 2018. Deep Water is the follow up to his debut album Falling into Pieces, which garnered praise from Billboard, Earmilk, and Nylon along with Spotify playlist's All New Indie, Ultimate Indie, and the feature of Fresh Finds. Deep Water's central theme examines what it is to be a working musician in this day in age. It dives into the fears and anxieties of what it feels like to lead a double life between work and music, and finding a way to come to terms with it.