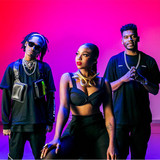 The main ambassadors of the music in Colombian pacific coast. The mix of urban sounds and the style of the pacific,

Choc (Chocó) Quib (Quibdó) Town (Our town) actually is one of the biggest Latin-American groups in the international ground, their unique rhythm and lyrics helped them start a revolutionary music movement and achieve a giant success in their career with help of La Industria INC, Toro Music Group and Sony Music Latin. In 2018 Chocquibtown released their most recent album ''Sin Miedo'' with important collaboration of international artist like Nicky Jam, Carlos Vives, Alexis Play and Wisin among others. ChocQuibTown won the important recognition of a Latin GRAMMY in the year 2015 in the category "Fusión Tropical" with the album "El Mismo". In the year 2010 ChocQuibTown won the award of a Latin GRAMMY in the category "Canción Alternativa del Año" for the song "De Donde Vengo Yo". The band is conformed by Goyo ''La Reina del Combo'' in english 'The Queen of The Group", the heart, soul, love and beauty of this team. Tostao, represents the swag, happiness, and flow of the group. And last but not least Slowmike, the good vibes and creator of the electronic and unique rhythms. 3 important pieces that create a magnificent group. Triple platinum winners for the 60,000 + copies