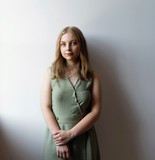 Rachael Frankruyter is a 19 year old singer-songwriter from Stratford, Ontario. Rachael’s passion for music took off at the age of 7, when she began taking classical singing lessons. By age 12, Rachael quickly realized that her love for music went beyond classical and opera music, and she learned how to play the guitar and the piano. She went on to perform at many local music events and competitions singing in both classical and folk-pop styles. Meanwhile, she also began writing songs.   The release of her debut self-titled EP came quickly In August of 2019, weeks before she began her studies in Classical music at Western University. With folk roots surrounded by ambient electric guitars, and dreamy vocal harmonies, Rachael’s story-telling shines through as she discusses the ups and downs of being a teenager, growing up, and first heartbreaks.  Rachael explores a more mature sound in her newest EP “For Today” which is out now.