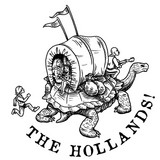 The Hollands! are a multinational family band with roots in Australia/US. They are 21st-century nomads and frolic in the Americana/Folk Revival scene. With four full-length albums under their belt, the Hollands! are seasoned performers, performing in the US, CA, AUST, and SE Asia. They are known for engaging audiences and rousing a sing-a-long with their intimate merrymaking. By the end of their performance, audiences will feel like they are part of the band. This is the experience and magic that happens when The Hollands! come to town. Jana Holland, originally a Michigander, with an interest in songs of old and desire for the laymen to experience community through song. She plays Mandolin, Banjo, Guitar.

Songwriter in her own right, delicate and natural harmonies are added by Graciana Holland. This little songbird is stunning, immediately evoking a desire to hear more. She is also accomplished on the Ukelele, Piano, Guitar. Craig Holland, a native of Victoria, Australia, began his music career playing punk rock, including a 7-year stint in Ballydowse, a Chicago-based Celtic Punk band recorded by famed indie producer, Steve Albini. Craig brawny rhythm's offer energy and cohesiveness to The Hollands! overall sound. Named after the infamous Australia bush Poet, Banjo Patterson, the youngest Holland, Banjo is a force to reckoned with on the Cajon. His inventive beats compliment Craig's mesmerizing rhythms. Together they set a tone of movement that gets the feet tapping.<br>