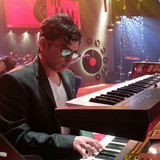 Ajay Singha is a Mumbai based Music Composer and Producer popularly known for his unique style of composition and production, which is fresh and strikingly original. His compositions speak of musical diversities which can be seen in every song. Be it his first movie "KAAKAN" whose symphonic style title song featuring Shankar Mahadevan and Neha Rajpal introduced a new sound in the Marathi film

or the romantic ghazalish hit “KYUN DIL MERA” featuring Mohit Chauhan from the Hindi movie “PAHARGANJ”, or "RONGILA RE MON" the Bengali-Assamese folk fusion song for SVF music ORIPLAST ORIGINALS featuring Akriti Kakar and Dikshu, his songs are widely different from each other but commercially appreciated. He is also known for his dramatic scores for the movie "Kaakan" and edgy hard hitting score for the series " Abhay " on Zee 5 which contributed majorly to the success of both these projects. Ajay Singha is also known popularly among the young audiences as the producer of two very trendsetting series of retro songs "Bollywood Unwind" music albums on Strumm Sounds and "The Jam Room" on Sony Mix. Both these projects have many viral hits including "Tu Tu Hai Wahi" featuring Jonita Gandhi. He has composed two very distinctive sounding original Indi pop albums "In Rahon Mein” released by Sony Music and "Lafz Unkahe" released by Strumm Sound. The album “Lafz Unkahe” has topped the itunes charts for two weeks and the title song